Coffee with milk is a familiar drink, whether you go to Starbucks or your local independent coffee shop.

At Starbucks, you will see Caffe Misto listed on the menu. Here is what you need to know about the differences between the Caffe Misto and a regular Latte.

What is a Starbucks Caffe Misto?

The Starbucks Caffe Misto is simply a one-to-one ratio of brewed coffee and steamed milk.

You may have also heard the term café au lait. Café au lait, or coffee with milk, is the same type of drink as the Caffe Misto.

It is a simple beverage you can make at home with a French press or drip-brewed coffee machine. You can mix the coffee and milk any way you like.

What is the Difference Between a Latte and a Misto?

A Latte and the Caffe Misto are essentially the same types of drink.

They are both coffee with milk. Yet, there are some differences. A Latte uses espresso beans and has a layer of foam on the top.

A Misto features ½ cup of steamed milk and ½ cup of freshly brewed (regular) coffee, unlike a typical Latte containing only one espresso shot and two layers of foam.

There are brewing differences between a latte and a Misto. An espresso machine pressurizes the espresso beans with near-boiling water to give you a caffeine-packed shot of latte coffee in 30 seconds.

This pressurization process provides the Latte with its intense flavor.

A regular coffee machine slowly brews ground coffee beans with hot water for several minutes to give you a cup of coffee for your Misto. This slow brewing process provides the Misto with a less intense flavor than the Latte. 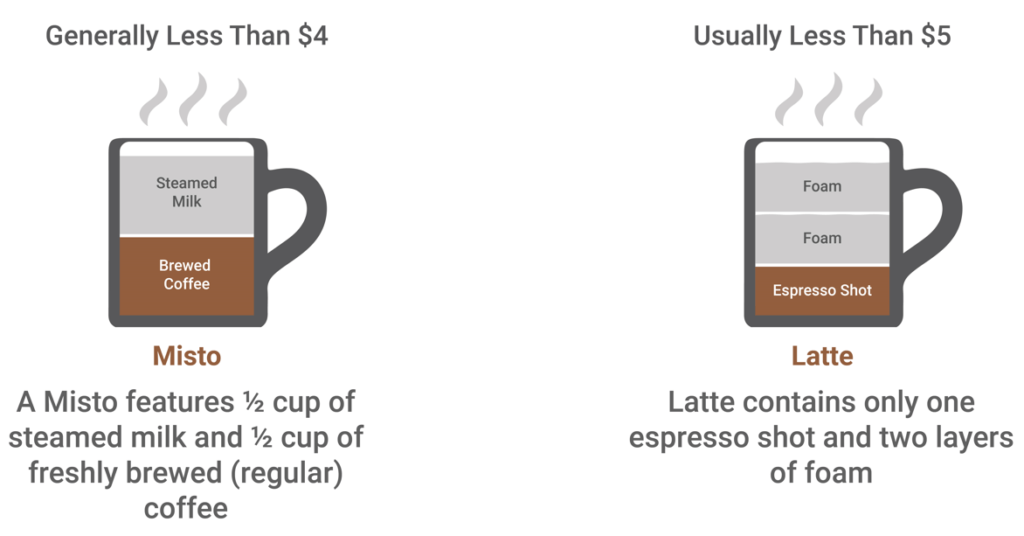 Cream vs. foam is another difference between the Misto and the Latte. The Misto does not have a layer of milk foam and has a creamier texture than the Latte.

The Latte has a layer of milk foam that gives it a frothier texture.

Caffe Misto has a strong coffee flavor, while the milk gives it a smooth finish. However, steaming the milk provides the Caffe Misto a sweeter taste.

A latte has a more intense flavor because of the espresso coffee.

You can add spices like cinnamon or a pumpkin spice blend to give your Caffe Misto or Latte a little more taste.

You can also add flavored syrups like vanilla, white chocolate mocha, or hazelnut to add some sweetness.

How is a Latte Made?

A latte is a drink that consists of steamed milk and a single shot of espresso. A latte differs slightly from regular coffee in that it uses more foam which produces a much thicker, velvety texture.

The difference between the beans used in espresso and coffee is how they are roasted, ground, and brewed.

Roasters generally use Robusta beans because they have a little more caffeine. They roast the Robusta beans longer and darker for espresso than they would for regular coffee.

You can use espresso beans for coffee, but you need to grind the beans finely.

A Latte has three layers. It has one once shot of espresso, four ounces of milk, and one ounce of milk foam. You use less espresso because it is thicker and has a more concentrated flavor than coffee.

For example, one ounce of espresso is like having eight ounces of coffee. The high milk content tames the impact of the espresso and gives the drink a smooth texture.

Watch the milk content because too much milk will result in a regular cup of warm coffee.

You can also have a double shot of two ounces of espresso. Just increase the milk content to five or six ounces.

An espresso maker is best for making a Latte, but it is not necessary. You can brew espresso coffee beans in a regular coffee maker. While the espresso is brewing, heat the milk in a saucepan.

You can either use a milk frother or a whisk to froth the milk. When the espresso finishes brewing, pour it into your favorite mug.

When the milk is warm and frothed, use a spoon to pour the milk into the mug with the espresso while using the spoon to hold back the frothy milk. Then scoop out the foam and place it on top of the Latte.

You can add some sugar, spices, or your favorite flavored syrup to give your Latte some sweetness and flavor.

How is a Misto Made?

Making a cup of Caffe Misto at home is easy. All you need is a coffee machine and an equal amount of coffee and milk. Start by brewing one cup of coffee.

You can brew any coffee bean for this drink. At the same time, the coffee is brewing, heat one cup of milk on the stovetop.

You do not need to boil the milk, and you can whisk the milk to make it frothy.

When the coffee is finished brewing and the milk is heated, combine the coffee and milk in a coffee mug. Then you can add your favorite spice or flavored syrup and enjoy.

Use an equal amount of coffee and milk, but you can adjust the amounts to your liking.

You can also use non-dairy milk alternatives like almond, soy, oat, or rice while following the same process to make this drink.

Health Differences Between a Latte and a Misto?

The coffee in a latte and the Caffe Misto is fat-free and sugar-free. Except for the caffeine, the coffee in both drinks is healthy for consumption.

The milk in both drinks is also beneficial for those who can tolerate lactose.

The only health difference between the two drinks is the calories. A latte has more calories than a Caffe Misto.

Also, any use of sugar or syrup can reduce some nutritional aspects of either drink.

The calorie content in both drinks will increase if you add other ingredients like almond milk, flavored syrups, whipped cream, or sugar.

The amount of caffeine will typically remain the same depending on how many espresso shots your Latte has.

However, a latte generally has less caffeine than a Caffe Misto because it uses espresso rather than regular coffee beans.

The Caffe Misto and Latte are two of many versions of coffee and milk. The next time you go to Starbucks, order a Caffe Misto and a latte. To see which one you like better, compare a taste test without added sugar, syrup, or spices.